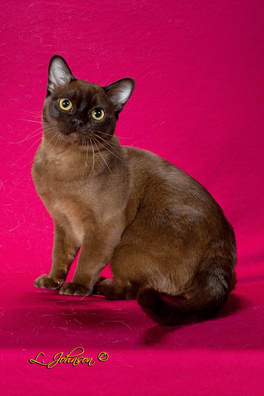 BurmesePleez Hairy Houdini, CFA Champion
Burmese have often been described as "bricks wrapped in silk."  The following description is based on the Cat Fanciers breed standard:
The Burmese is a cat of medium size, but with substantial bone structure and well developed muscles.  She should feel much heavier than she looks, without being fat.  Males tend to be somewhat larger than the females when they are full grown, weighing from 6-10 pounds, with females weighing between 5-8 pounds
The overall look of the Burmese is that of a round cat.  Everything about the cat, from the body shape to the paws to the eyes to the tips of the ears should be rounded.  The Burmese has a sweet expression on her pleasantly round face.  The neck is short and well developed.  The tail is medium in length.  The eyes can be yellow or gold.
The coat is fine and lies close to the body.  It feels like satin when you run your hand along it.  No matter the color, the Burmese coat should be glossy and uniform in color, with no tabby markings or white patches.  Because the Burmese has a single, satin coat with no undercoat, they shed much less than most cats. 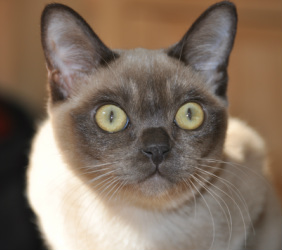 Burmesepleez Birdie
The Burmese is a very person-oriented cat and will come to you easily.  They are quite content to spend their time in your lap or sitting by your side, sharing in your company.  This does not mean that they are couch potatoes!  The breed is very active, especially the kittens, and will play with their toys and keep you entertained with their antics.  They are highly intelligent cats and easily adapt to knew environments, finding their own special places and gradually adjusting to your routine.
One of the problems we find is trying to avoid stepping on them!   Both our Burmese follow us throughout the house and want to be a part of whatever we are doing.  If someone is at the computer, a Burmese will sit on their lap while they type.  If Mom is washing dishes, a Burmese will curl up on the carpet at her feet.  If the kids are playing Wii, a Burmese will brush against them until they stop for a scratch.  If someone is cleaning, a Burmese will want to see what it is they are doing.  It is not unheard of for a Burmese to even join their person in the bath!!
Although the Burmese has been said to "turn on the most soulful eyes in catdom and 'con' you out of everything you own," the Burmese has no other natural defenses.  Because they are sweet, docile and completely non-aggressive, Burmese should NEVER be allowed to roam outside. 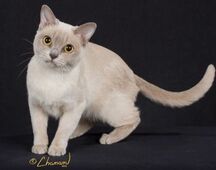 Burmesepleez As You Wish
﻿The Burmese cat traces its origins back to the 1930's, when Dr. Joseph Thompson acquired a lovely walnut brown female cat with large gold eyes named "Wong Mau", brought to the United States from Thailand on the Malay Peninsula.  Through careful selective breeding to seal point Siamese cats and a few other cats brought from Thailand, the Burmese breed was born.
Dr. Thompson's efforts initiated what some believe to be the first time in the Cat Fancy history that cats were selectively bred in order to define the genetics of a potential new breed.  Because of this, many Siamese breeders objected to the Burmese being officially recognized as a distinct breed by the Cat Fanciers Association (CFA).  After much hard work on the part of many dedicated breeders to distinguish the Burmese from the Siamese, certification was permanently granted by the CFA in 1957.  From there on, the number of Burmese catteries and cats began to steadily increase.  At this time, the only recognized color was dark brown, or "sable" so as to distinguish it from other similar breeds like the Siamese or Tonkinese.  For a more detailed history, see www.united-burmese.org/burmese-history.html
​
Colors - The Introduction of Dilutes
Despite the efforts of the breeders to produce only sable cats, all through this time they were still sometimes producing kittens that were anything but brown.  Blue (gray), champagne (honey-beige), and platinum (silver) kittens were also being born.  It took many years and the introduction of a temporary breed for these dilute cats, the Malayan, before they were finally recognized by CFA and permitted in the show ring in the mid 1980's.  Currently, the CFA officially recognizes Burmese cats in sable, champagne, platinum, and blue, although in Europe and in TICA in the US, the recognized colors for a Burmese also include cinnamon, fawn, red, lilac, and various colors of tortoiseshell.
​
The Look - "Traditional" v. "Contemporary"
Over the last thirty+ years, a controversy has raged within the community of Burmese breeders over the correct head type of the breed.  In the quest to shorten the length of the muzzle for a rounder profile, a cat was produced  with a very high, domed head and much shorter nose, a little reminiscent of the short face on a Persian cat. As cats from these lines interbred, about half of the kittens produced had the sought after look (sometimes known as "contemporary"), a quarter had the longer, more typical noses, and a quarter were born with a fatal craniofacial deformity.  One group of breeders (sometimes known as "traditional") felt that continuing to breed these cats was unethical and determined to only breed lines known to be free of the defect.   Because of the intense emotions generated by this philosophical difference, breeders from the traditional viewpoint refused to share cats with those using contemporary lines, resulting in a much smaller gene pool for each type and the eventual weakening of the breed through the loss of genetic diversity.  Although both types of Burmese exist side-by-side within the CFA show ring, with judges in the mid-west and west coast favoring the Traditional Burmese, and the east coast favoring the Contemporary look, it was not a healthy working relationship.

2012 was an important year in terms of resolving some of the differences that have long separated the two groups of breeders.  Thanks to the dedication and hard work of Dr. Ruth Lyons of UC Davis and the consistent financial grant funding supplied by NABB, years of research have finally resulted in the identification of the gene that causes the craniofacial deformity.  Genetic tests are now available to identify those cats that carry the recessive gene responsible.  Once identified, breeders know which cats, when bred together, can produce kittens with the deformity, which will produce only carriers for the deformity, and which will produce only non-carrier kittens free of the defective gene.  Our present goal is to totally eliminate the gene within 10 years time without further weakening the gene pool as a whole.  Thanks to advances in genetics in identifying coat color and patterns, the CFA Burmese Breed Council is further working to expand the Burmese gene pool by allowing the introduction of genetically tested "Foundation Burmese" cats imported from Thailand as well as intermittent outcrosses with the Tonkinese and Bombay breeds because of their close ties to the Burmese.  Kudos to the Burmese Breed Council for their significant investment over many, many years, in preserving the health and diversity of this wonderful breed by pioneering areas of genetic research thought impossible just a few years ago.  Thanks also to the dedication and hard work of Dr. Lyons and her staff at UC Davis that resulted in the identification of various genes affecting the health of cat populations and the tests now available that allow breeders to breed continually healthier cats.

Health and Well Being
Despite out current issues, American Burmese cats are typically healthy and live long cat lives.  I constantly get emails from families looking for a new kitten after the loss of a beloved burmese at 19, 20, or 21 years of age.  For information on breed specific health pre-dispositions, please click on the following link.
http://fabcats.org/breeders/inherited_disorders/burmese.php